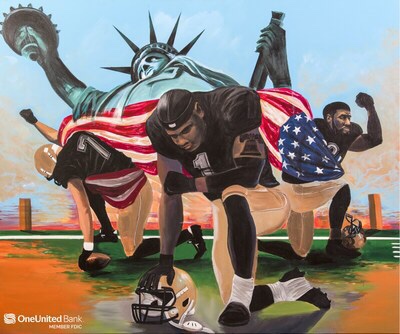 OneUnited Bank, the largest Black owned bank in the country, is proud to announce that it has achieved a milestone of over 100,000 customers. The Bank credits its social justice activism and its technology platform for its rapid growth.

In 2016 due to the spate of murders of Black men, rapper and activist Killer Mike urged Black America to move their money to a Black owned bank, spawning the #BankBlack movement. After the 2020 murder of George Floyd, #BankBlack saw another surge. Tens of thousands heard the call and joined the “unapologetically Black” OneUnited Bank, bringing the Bank to over 100,000 accounts, and continuing its leadership as the largest Black owned bank, focusing on closing the racial wealth gap and creating generational wealth. This milestone has not been achieved by a Black bank since Maggie Lena Walker, the first Black woman and first woman bank president in the United States, founded St. Luke Penny Savings Bank in Richmond, Va., in 1903.

To accommodate the Bank’s rapid customer growth, OneUnited is proud to announce the expansion of its banking services to over 100,000 locations. The Bank introduces its new Cash to Your Card service, which gives its customers access to an additional 90,000+ locations, expanding the Bank’s ability to service customers nationwide. OneUnited Bank customers can now utilize Green Dot to deposit cash on the go (reloading) including Reload @ the Register™, Walmart® Rapid Reload and MoneyPak®! Retail service fees and limits apply.1 OneUnited Bank does not charge a reload fee. The Bank’s branches, 90,000 Cash to Your Card service locations, and 30,000 surcharge free ATMs brings the Bank’s total locations to over 100,000.

“Our customer base continues to grow rapidly, and we have expanded access and now have over 100,000 locations to better meet their needs. Importantly, we’re on our way to fulfilling Black America’s long-held dream of organizing our spending power to create social and economic equality in our society,” says Teri Williams, President & COO of OneUnited Bank.